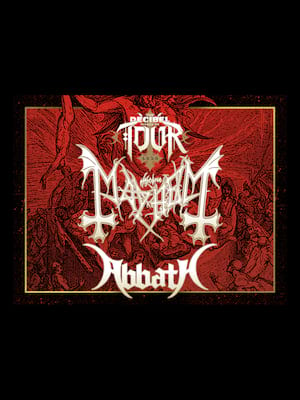 Black metal pioneering outfit Mayhem is no stranger to controversy. Making waves in their homeland of Norway in the early 80s, their deeply dark sonic stylings were often overshadowed by their ties to the burning of Churches as well as the suicide of their original singer Death and the murder of their guitarist Euronymous at the hands of their bass player Count Grishnackh. As such, the outfit is survived by original founding member and drummer Hellhammer.

Hot on the heels of the release of their sixth studio album Daemon, Mayhem is teaming up with former Immortal axe-player Abbath Doom Occulta and his band Abbath for the 2020 co-headline Decibel Magazine Tour. Together they'll blow the cold winds of the chilling metal genre onto US shores, bringing bone-shaking riffs, driving drums and screaming vocals along for the hell-raising ride.

Seen Mayhem? Loved it? Hated it?

Sound good to you? Share this page on social media and let your friends know about Mayhem at Empire Control Room.