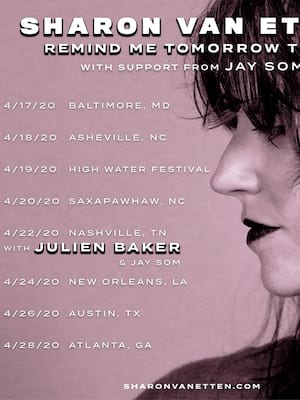 The ultimate cool girl makes a come back

Sharon Van Etten returns to the road in spring 2020, touring in support of her 2019 LP Remind Me Tomorrow. With this being her first album since 2014's Are We There, the New Jersey native brings her folk-infused rock melodies her adoring fans. Featured as one of Rolling Stone's 'Big Future' artists Van Etten steps back into the limelight, to excite music fans once again.

Having started making music at a young age, the ever determined Van Etten self-released a number of records throughout her formative years. Finally noticed by Language of Stone, Van Etten released her 'debut' studio album in 2009, signaling the beginning of her illustrious career.

A woman of many talents, Van Etten hasn't just limited herself to making music. The star has also been featured on a number of TV shows, with the most recent being the hit Netflix series, The OA.

Some venues are age restricted so check with the venue before booking tickets.

Sound good to you? Share this page on social media and let your friends know about Sharon Van Etten at Stubbs BarBQ.