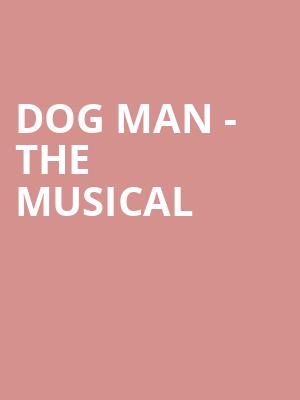 You have to love a family show that makes adults laugh, too.

Why See Dog Man - The Musical?

The Smash Hit Kids Show Heads Out On Tour

A weird and wonderful world awaits audiences in Dog Man - The Musical, the riotously funny new production based on the best-selling children's cartoon series by surrealist genius Dav Pilkey (Captain Underpants, Dumb Bunnies). Praised for being a family show that makes adults laugh as much as the kids, the Off-Broadway cult hit enjoys a tour of North America.

Taking its cue from Piley's Dog Man: A Tale of Two Kitties, the irreverent story follows fifth graders George and Harold. Creating comics together ever since they were little(r), they decide the time is right to bring their colorful creation Dog Man to the stage in his very own musical. With a lunchtime deadline looming, they bring the crime-fighting part-dog, part-man to life along with his greatest enemies Petey, the evil cloned cat, and Flippy, the cyborg fish who are intent on revenge and destruction.

Photo by Denise Jans on Unsplash

Seen Dog Man - The Musical? Loved it? Hated it?

Sound good to you? Share this page on social media and let your friends know about Dog Man - The Musical at Paramount Theatre.