Sorry! You missed Idles at Mohawk 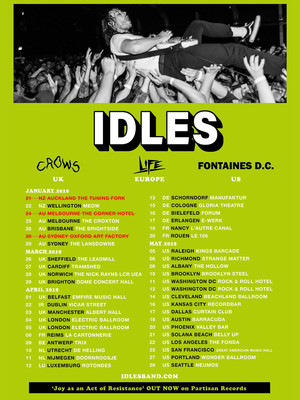 Idles guitarist Mark Bowen is walking across the venue's ceiling. Held aloft by the crowd, the topless musician turns himself partly upside down to take advantage of the Academy's low-hanging architecture.

Idles Tour Joy As An Act Of Resistance

Describing themselves as an 'angry band', English punk rock outfit Idles fuse the cathartic, angular rage of their scuzzy guitar riffs, pounding drum beats and rebel yell vocals with bitingly intelligent lyrics that explore everything from politics to toxic masculinity to tales of working-class strife. After the release of their acclaimed debut album Brutalism in 2017, the Bristolian rockers released their sophomore effort Joy As An Act Of Resistance a year later and are now touring the critically lauded follow up in North America.

Whilst waxing lyrical on their anti-Brexit, pro-immigration and pro-gender equality point of view, this latest album finely balances a no-holds-barred agenda with an overarching sense of fun, peppering their defiant anthems with a sense of humor, lyrical in-jokes, and buoyant, singable choruses. As such, they put on a raucous live show where frontman Joe Talbot's boundless energy and wide-eyed, on-stage growling evokes mosh pits, mass sing-alongs, and general rock and roll bedlam.

Seen Idles? Loved it? Hated it?

Sound good to you? Share this page on social media and let your friends know about Idles at Mohawk.