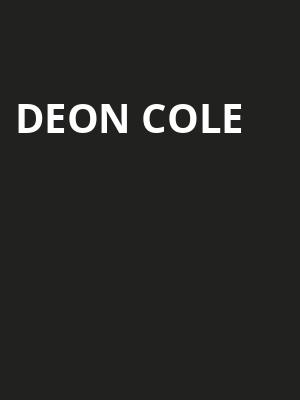 Letting jokes marinate is something Cole is especially adept at. Staring down audience members, daring them to laugh, or not to laugh, his animated, aggressive comic confidence stands unafraid to see if they're going to follow him.

After earning two NAACP Image Awards and two SAG Awards nominations for his career-defining role on critically acclaimed sitcom Black-ish, Deon Cole has fast become a household name. But the multi-talented performer has a long list of credits not only as an actor but as a stand-up comic and Emmy-nominated screenwriter to boot. Don't miss out when Cole returns to his comedy roots during the hotly anticipated Coleology Tour.

Cole is adept at exploring hot button political issues and the racial divides in America with quick-wit and an intelligent observational eye. Careening from hilarious rants that target millennials to quirky off-the-wall bits including 'questions that blow your mind' (e.g. Why did Adam and Eve have belly buttons?), the scene-stealing showman knows how to put on one riotous comedy show.

Sound good to you? Share this page on social media and let your friends know about Deon Cole at HEB Center at Cedar Park.