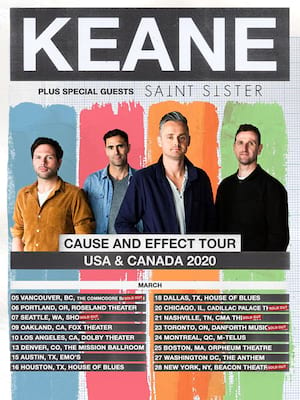 Keane bring Cause and Effect to the road!

Cause and Effect Tour

Keane are back. After over 8 million sales of Hopes And Fears (2004) and Under The Iron Sea (2006) combined, sold-out arena tours, awards, plus an undeniable collection of hits including Is It Any Wonder?, Everybodys Changing, Crystal Ball and Somewhere Only We Know, one of the best-loved bands are about to surprise and thrill all over again. Kicking off in Vancouver, Keane will trek across North America in support of their upcoming album Cause and Effect, the follow up to 2012's Strangeland.

The album came as a surprise to the band, when singer Tom Chaplin wrote an album's worth of music whilst he was going through personal struggles. The songs, both fueled with humor and pain, drew the band back together and has brought them to where they are now.

Sound good to you? Share this page on social media and let your friends know about Keane at Emos East.