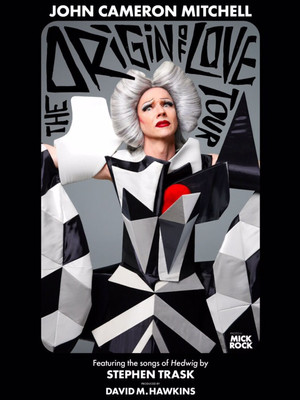 What began as a risque cabaret act from creators Stephen Trask and John Cameron Mitchell, then morphed into a 1998 off-Broadway cult hit and 2001 film before finally hitting Broadway in 2014, is now - in a different era - a piece of Americana

Why See John Cameron Mitchell - The Origin of Love?

The Origin of John

John Cameron Mitchell takes to the stage once again for this special evening delving into the history of his famous alter ego Hedwig. An outrageous East German trans superstar and front person of The Angry Inch, the character burst onto (off) Broadway in 1998 in the groundbreaking rock musical. Hilarious and irreverent, hear songs from the show, stories from Hedwig's past and more as John previews his newest project - new musical Anthem.

Outside of Hedwig's impressive outfits and persona, John Cameron Mitchell has made waves in movies, stage and tv as a writer, actor and director. In 2014, the Broadway revival of Hedwig saw him step back into Hedwig's high heels as the production scooped a Tony for Best Revival of a Musical!

Sound good to you? Share this page on social media and let your friends know about John Cameron Mitchell - The Origin of Love at Bass Concert Hall.