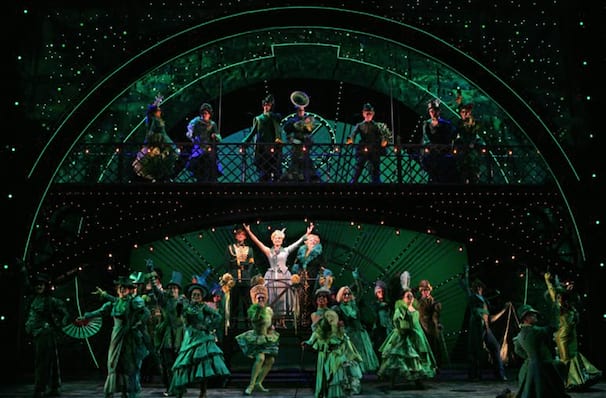 Even though Wicked feels like it's been around since the beginning of time, there's still a few things many of us don't know about the Broadway smash-hit.

Wicked continues to cement itself at the top of the theater game. Fans from all over the world know the score like the back of their hand, but maybe these 6 fun facts make you realize that there's still so much more to learn about Wicked!

Warning: This post may contain spoilers for "Wicked: The Musical"

As you can imagine, but may not actually realize - the show needs A LOT of electricity for its magic to really come to life. The amount of power the musical uses would be enough for 12 houses. That's not including the 250 pounds of dry iced used each day for the fog.

2. Named After The Author

In the original novel 'The Wonderful Wizard of Oz' written by L Frank Baum, The Wicked Witch wasn't given a name. Gregory Maguire created the name Elphaba using the author's initials L.F.B.

3. A Vacation in Hawaii

Hawaii, known for its palm trees and beautiful beaches - but also the place where Stephen Schwartz got the idea for Wicked! (Thank you, Hawaii). In 1996, whilst basking in the sunlight, a friend of Schwartz mentioned Gregory Maguire's book 'Wicked: The Life and Times of the Wicked Witch of the West'. Soon after, Schwartz got the book and was hooked - so much so, he called his lawyer once returning from his vacation and started obtaining the rights.

Picture this, you arrive in the enchanting Emerald City where denizens are bouncing around in Anti-Gravity boots and spinning around on Segues. Nope, that wasn't something I dreamed last night, this was the original intention! I wonder why it got scrapped...

5. Stunt Doubles Don't Have To Be People

Elphaba's hat, her broom and Glinda's wand all have 'stunt doubles' (I wonder what their salary is). During the fight in Act II, the elaborate versions are brought out and surprisingly they don't get damaged during this scene.

Idina Menzel missed her final performance as Elphaba due to falling several feet through a trap door during her performance. She was rushed to a hospital, still wearing her costume and green makeup. Fans began to question whether the role was cursed when Margaret Hamilton, who played the witch in The Wizard of Oz, suffered serious burns whilst filming the movie.

Do you know any interesting facts about Wicked which you think others won't know? We'd love to hear them over on our social media pages.

Forget all that you know about The Wizard of Oz and be transported once again to the magical land of Oz! This time, however, the action takes place way before the arrival of Dorothy and her pooch Toto....more info